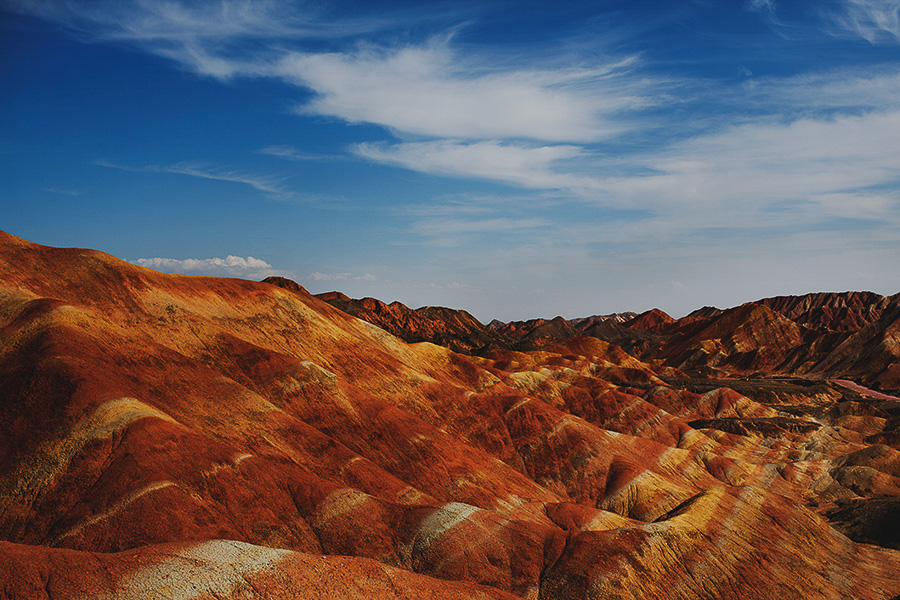 a complete list of all the places I visited while travelling to China last year. it was the first time exploring the world on my very own and it was such a wonderful experience! definitely recommended!

I figured I didn't need to be dependent on anyone but myself so I just travelled around the planet all alone. I'll admit it was a bit lonely at some points but I have absolutely no problems about spending some time on my own, sometimes I even suspect myself for enjoying my own company too much. besides, I wasn't by myself during the whole trip. I signed up for a guided tour group and then I met people from all over the world - Australia, Myanmar, Japan, France, Germany, China - so even though you're travelling alone it doesn't mean you'll be alone.

‍The First Beacon Tower marks the starting point of the Ming Dynasty Great Wall, and was built to give early warnings, via smoke signals, of approaching attackers. there's only ruins left of the actual tower (not shown on these pictures), but there's a clear light blue river floating by worth taking a peek at because yes the area is actually as stunning as the pictures show.

'm always eating way too much pizza, hamburger and pasta whenever I'm dining out but this time I wasn't in charge of the menu at all. I actually ate everything I was served - whatever that may have been - and surprisingly, I liked it all! vegetables, pork, soup, noodles, it seems like the Chinese kitchen is endless. obviously, eating Chinese food in China is definitely NOT the same thing as in Norway. it's so so delicious! rule#1: no pizza whenever travelling to China.

‍The Giant Buddha temple, located in Zhangye in Gansu, housed a 35m long Buddha made of wood and it's actually the biggest indoor sleeping Buddha in all of China so it's definitely worth a peek! sadly I don't have any pictures to show you of the actual Buddha because photographing was forbidden inside the temple.

it felt kind of mandatory to visit one of the wonders of the world, even though I'd already been there twice, but this time I visited other sections of the wall, built in the Ming Dynasty so it was so worth it! the weather was perfect for climbing the steep steps, the cool air felt fresh in my lungs and no pollution whatsoever bothered my inhaling. however, I wouldn't recommend anyone to wear high heels because I did and I'll admit it wasn't such an appropriate shoe choice.

‍this was actually the biggest surprise of the trip - in a good way! one of the caves was seven floors tall and offered such an incredible view at the top! I just stood there and soaked in the beauty because the caves were surrounded by this stunning scenic area with the snowy Qilian Mountain range as a beautiful backdrop. wow.

‍I'm actually not fond of recommending hotels (and that's why this is the first time) because some people might mistake my advices for advertising (but I don't have those things on here I promise) but I just thought I should mentioned these two located in Beijing because they sort of stood out from the rest.

East Beijing is located midway between the airport and the city which is kind of perfect as it'll only take you 20minutes with a taxi - equal to 60 yuan - to the airport and likewise to the city. the hotel offers an incredible breakfast buffet (including the sunrise if you're up early) and view of the dawn right from your bed. no sounds from noisy neighbours and the staff is ready to help you with everything, including finding the door to your room if you're ever in doubt (been there done that). the beds are comfortable and oversized and the showers are just like every shower should be. the hotel is right beside a massive shopping mall where you pretty much can find everything you need - coca cola (for 2yuans), food, post cards, clothes, etc.. warning: shopping malls in China tend to be enormous in size so it's extremely easy to get lost. I did. twice.

extremely convenient if you're just staying for a few days or like in my case - just one night. the hotel is obviously located real close to the airport and there's a shuttle from the hotel leaving every 15 minutes driving you to your terminal for free. there's a shower AND a bathtub and the beds are just how I like them - oversized and comfortable.there's absolutely no problem at all finding a hotel in Beijing (of course there's several other options) but I'd just like to share these two because they were my favourites.

The fortress at Jiayuguan, located in the Gansu province, is the western-most end of the Ming Dynasty Great Wall and is consisting of three defence lines - the moat, the outer city wall and the inner city wall. the three towers are such a spectacular view - especially at sunset!

‍they made everything with perfection and I just love the fact that everything is handmade and therefore very unique. I believe you can find several of these factories all over China, but I visited this one in Beijing.

‍it's nicknamed one of the most colourful places in the world and it's the main reason why I chose to travel to China in the first place. I wanted to see the colourful mountains with my very own eyes and it has truly been a dream-come-true. the red-coloured sandstones, located in the northwestern Gansu province, really make this place unique and worth seeing by yourself because yes it's unbelievably beautiful!

another scenic area, not loacted far from the Danxia landform, where the nature is almost just as amazing! definitely worth spending some time there because wow. just wow.

‍this was another scenic area in the geological park, and it was just so so pretty! I believe water had formed most of the landscape which made it even more special.

‍the country is famous for its tea leaves, having originated in China, so it seems like the number of different types of tea are infinite. so if you're into tea, be sure to find one of those cute tea houses - I think they're pretty much scattered all over Beijing.

‍taxi is incredibly cheap compared to Norway, and I found every driver extremely nice and helpsome even though they didn't understand a word of English. however, they navigated through Beijing like a superhero and drove me from A to B (reading the signs like nothing which I obviously couldn't). all I had to do was to give them my adress, written in Chinese.ps! the taxi driver doesn't neccessarily know the importance of a seat belt. when the speedometer hits 120km/h you do want to be sure you're fasten before he/she starts accelerating.it was an truly incredible trip, and now I'm only longing to get back because there's still several other places I'd really like to visit! (which hopefully will be in 2016)