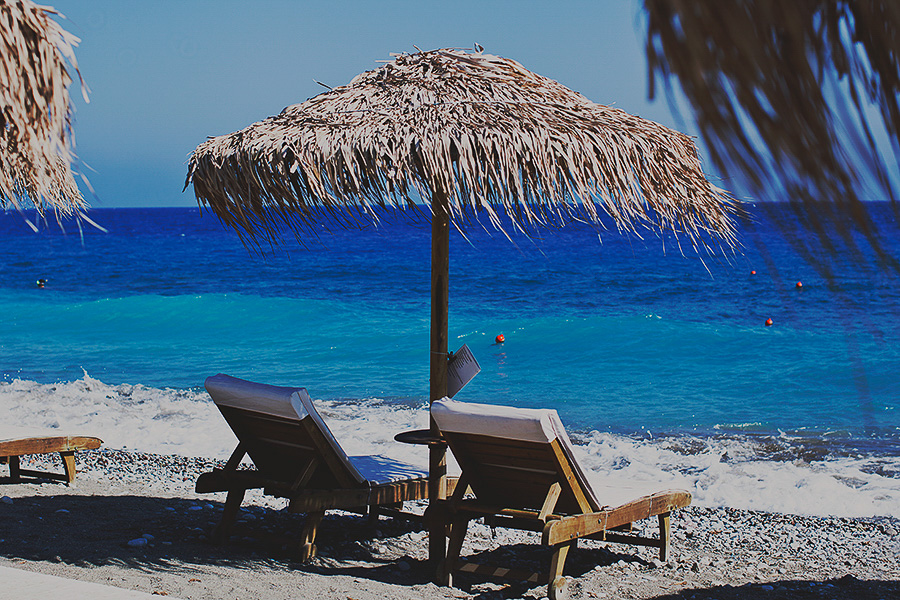 the solution of a typical tourist place including warmth, sunlight and delicious food but exclusive the massive tourism. I don't really enjoy those crowds of tourists so I was relieved when it turned out there weren't any.

‍I'm usually into pasta and pizza whenever I'm travelling and the word 'boring' describes my intake of food pretty well but I couldn't resist trying the traditional dish called gyros. it only cosists of pita bread stuffed with onion, pork, chips++ and it's actually a lot more tasteful than it sounds. I don't think anyone makes it like the greeks.

‍I don't think anyone needs to be convinced about how delightful it is to see blue as far as the eye can see really is. I jumped into the ocean more than once and the fact that I swallowed too much salt water didn't scare me at all..it usually does but this time it didn't matter..so be sure to find yourselves a hotel near the ocean, it's the only lifesaver when the temperature hits more than 40degrees..

‍the place must be the definition of beautiful. there's a medieval wall enclosing the Old town, and a walk throughout the place is mandatory. it has those old narrow, peppled streets with small charming shops and hidden restaurants serving local food everywhere. unique pieces made of leather tempted me to go all in, but I somehow managed to resist (when I thought about the amount of money I'd already spent on clothes, bags and shoes in London earlier that very same summer), but I'm not sure if I would be able to say no twice.

The valley of butterflies

‍the valley is unique, and it can not be compared to anything I have experienced before. thousands of butterflies were fluttering past me in a hurry, but if you timed your shot right, it was possible to get a close-up. we were folling this path through their propical home, and the place itself was so peaceful and undisturbed by human intervention it felt like a real time travel. I would recommed everyone to wear proper shoes for hiking - I  had of course chosen a pair of sandals and I almost faceplanted because of the slippery peppled stones forming the path - and also remember to bring with you a bottle of water because it's going to be sweaty and very hot. camera wise, I'll sugest you to bring with you a telezoom (if you're lucky enough to own one) to get the best shots of the butterflies. they are incredibly fast and they do like to keep their distance, so to avoid my 5omm wasn't really a problem for them at all.

‍the highlight! we were guided to the white city - Lindos - but even though it was not as impressive as Minas Tirith, it did have an impression of royality because of the ruins of the acropolis reigning over the rest of the city. it was such a splendid view up there, and again, I would recommend you to wear more appropriate shoes than I did - because I wore sandals, again - and this time I actually did fell when I carefully tried to climb down the way from the city. it was not one of my proudest moments in my life.PS! be aware of thieves. they broke into our appartment while we were sleeping, and helped themselves with bags (among other my very precious Spell bag), money, phone and pretty much everything they could find of value. I was so glad to find my camera in the exact same spot I left it the earlier day. it would be a catastrophe if it was stolen because it's really the love of my life.